After two years of hard work, one of the greatest producers in Jewish music, Yossi Green presents the album: ‘Emet Ve’Yatziv’ – ‘Roth & Green’ together with singer Avremi Roth. The cooperation between the two of them, produced an album packed with 10 hits of which some of the unique ones are: ‘Hashem Elokeynu’ Avremi’s up-beat hit that was released a few weeks ago and captured radio stations and weddings of the sector, ‘Emet Ve’Yatziv’ the title song of the album and another up-beat hit, ‘Yetzave’ arranged in a very surprising Jazz style, ‘Zachor’ musically arranged by Dudi Roth (Brother of…) ‘Mi Adir’ a thrilling performance of a song that will accompany many Chuppa’s in the time to come, and of course ‘Moshe Ve’Aharon’ that has been categorized as one of the most refreshing renovation that has come out in the past few years.

In the last few days while the album was at its final stages of completion, Avremi’s father a man of charity and good deeds, R’ Levy Ben R’ Hillel Roth z”l passed away. Therefore, Avremi decided to dedicate any awakening that these songs may cause to the everlasting memory of his late father.

The producer Yochai Kfir, Avermi’s manager and handler tells: “The album was launched in collaboration with Mishpacha Magazine in Israel and the United States and was released for sales at selected stored. At the same time the album was released in a unique and luxurious gift box and is being distributed to members of the media and the Jewish music industry”

A few weeks ago Yossi Green was interviewed on the “Z Report” hosted by Yossi Zweig on the Nachum Segal Network in the United States. He spoke about working with Avremi and the new album. During the interview, Yossi Green describes Avremi’s impressive vocal abilities with such tremendous admiration, he compares Avremi to the great Chazan Yoss’le Rosenblatt z”l. For the full interview (with Hebrew subtitles)

In the monologue presented on the album cover, Yossi Green writes: “It is with limitless Siyatoh Dishmayoh and great excitement that I bring to you this new production of Avremi Roth – Emes Veyatziv. Avremi is blessed with one of the most unique voices and sweetest personalities I have ever had occasion to work with. I can only describe his voice as a most comforting, soothing, Jewish Baritone/Tenor full of joy, heart and soul!”

In the past Avremi released two studio albums; ‘Ata Nigleta’ – Chazanut, ‘Malachei Hasharet’ – Singing, and another two ‘Zitz’ albums that were very favorably received and successfully achieved great popularity with hundreds of thousands of views on Avremi’s Youtube channel. These days Avremi returns from Mexico where he stands before the עמוד as he does every year during the High Holidays. 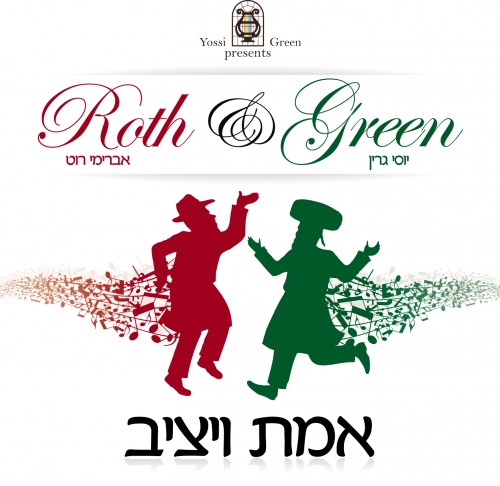