They both have roots in Poland and grew up in Tel Aviv, but the musical career paths of violinist Itzhak Perlman and Chazzan Yitzchak Meir Helfgot couldn’t have been more different — until those paths met a few years ago for a performance that took place, of all places, at the White House Lawn. Now they’ve joined forces once again, this time on a new CD that will be released by Sony Music on September 4. The behind-the-scenes story of this unusual collaboration.

It’s not commonly known that the wife and children of violinist Itzhak Perlman enjoy regular Tanach study sessions with a teacher named Judy Geldzahler, whom Perlman describes as “quite frum.” One evening, Mrs. Geldzahler mentioned that she had to run out to a concert after the class.

“Who’s giving the concert?” Toby Perlman, herself a musician, wanted to know.

“Toby and I are big fans of great singers,” explains Mr. Perlman, who is himself possessed of a resonant bass voice — in fact, he has gamely sung minor operatic parts a few times, as well as duets with opera stars Luciano Pavarotti and Placido Domingo. “After one of those duets, people asked me what I planned to do afterwards,” he says with a grin. “I told them it was my ‘farewell debut.’ ”

At any rate, the next time the Perlmans were in Tel Aviv for an engagement with the Israel Philharmonic, they heard Helfgot would be singing at the Mann Auditorium. “He was phenomenal,” Perlman recalls. “After that, I approached him and said, ‘Let’s do something together.’ ”

You might say that Perlman and Helfgot are two sides of the same Jewish musical coin. Although one wears casual button-down shirts and no yarmulke, while the other dons a long frock and tucks his pants into his socks, both are Israeli, from the Tel Aviv area, and both are from Polish backgrounds. Perlman was born to parents who left Poland in the 1930s, settling in Tel Aviv; Helfgot’s grandparents heeded the Gerrer Rebbe’s warning to get out of Europe, and also left in the 1930s, when his father was a little boy and his mother not yet born. Perlman was discovered as a musical genius and brought to the US to study at the Juilliard School after his bar mitzvah; Helfgot, after becoming bar mitzvah, was sent to Jerusalem to learn in Yeshivas Sfas Emes.

In the past few years, the two have come together as performers to share what unites them, something dear to both their hearts: traditional Jewish music. During Chanukah of 2010, bundled against the cold, the two performed together on the White House Lawn at the lighting of the national menorah. In March 2011, they did a concert in Los Angeles’s Saban Theatre entitled “The Soul of Jewish Music,” benefiting the Bet Tzedek Holocaust Survivors Justice Network. Then, in what might be called a leap of faith, Sony Music approved Perlman’s idea to make a CD featuring them performing Jewish music. Entitled Eternal Echoes: Songs and Dances for the Soul, it’s due for release on September 4, shortly before the Yamim Noraim.

Helfgot’s fellow cantor at the Park East Synagogue, Cantor Benny Rogosnitzky, says that Sony is usually geared to the youth market, but “they believe in Perlman, so they believed in the project. When Perlman first proposed this shidduch, the folks at Sony didn’t even know what chazzanus was.”

They had never heard of Helfgot either. “But then they heard him sing,” Perlman says. He chuckles and adds with wry understatement, “That didn’t hurt.”

Perlman’s Projects After sixty-plus years of playing the violin, Itzhak Perlman has become the undisputed world master, able to execute any type of music with apparent effortlessness. But beyond the virtuosity, what warms people to Perlman is his mentschlichkeit: This is a man who truly loves not only all sorts of music, but all sorts of people.

He’s also always game to try something different, be it jazz or klezmer, an appearance on Sesame Street or playing a film soundtrack (he performed the wrenching theme to Schindler’s List). His generosity of spirit can be seen in his dedication to helping young musicians reach their potential — he teaches at the Juilliard School, gives workshops all over the world, and together with his wife founded the Perlman Music Program, a summer camp for promising young musicians. Klezmer musician Andy Statman, who has made recordings with Perlman and played with him on some 30 gigs, told Mishpacha, “He’s a wonderful, approachable person who likes all kinds of music, even the pop stuff … but he’s also a deep musician, who feels a responsibility for the musical traditions he’s inherited.”

Perlman and his family spend their summers in the Hamptons, in a sprawling, white clapboard house overlooking an enormous lawn bordered by flower gardens and fruit trees. No rickety bungalow, this, not with its sparkling swimming pool and spacious patio visible through the bright, yellow kitchen with cathedral ceilings, ceramic tile, and modern art.

Yet the house has a relaxed, lived-in feel, and when Mr. Perlman receives me in a spacious living room with comfortable couches the family pooch — a black Portuguese water dog named Motek — jumps up to snuggle into the cushions. Perlman is neatly attired and young-looking for his almost-67 years; the dark, wavy hair has grayed, but his face is smooth and his eyes a bright blue. Having lost most use of his legs from childhood polio, today he deftly uses a motorized scooter to get around. He apologizes for the lack of air conditioning. “We never put it in downstairs,” he says. “In Israel we never heard of air conditioning.”

Asked about his family background, he relates that his father came from the town of Tarnopol, and his mother from Kelce, spelling it for me. “Is that like Kielce?” I ask. “I know there was some sort of famous pogrom there.”

Perlman gives a droll look. “Is there a difference between a famous pogrom and a not-famous pogrom?” he says, letting out a deep, infectious laugh. “Could you brag, ‘My pogrom was more famous than your pogrom?’”

His parents were traditional Jews, he says. “They kept kosher, they went to shul. My mother made all the Jewish dishes, sweet gefilte fish and matzoh balls and jellied ‘fees,’ the cow’s leg.” Even today, his apartment in Manhattan is “strictly kosher,” a concession to one of his married daughters and her husband, who are “very kosher.”
“You know how it is with Jewish parents,” he says. “You want your children to eat by you.”

His parents spoke Hebrew in the home, but would use Yiddish to tell secrets, “so of course the result was that I learned Yiddish. After that they had to use Polish, but by then it was too late [for me to learn]. When I used to perform in Germany, I would get along by speaking Yiddish with a German accent.”

Perlman began playing the violin shortly after age four. “I wanted to play at three and a half, but I was too young,” he says. By the time he was 13, his family had moved to the US so he could pursue his musical studies. His prodigy status was cemented with an appearance on the Ed Sullivan Show.

In Israel in the 1940s and ’50s, family entertainment centered around the radio. Perlman remembers affectionately listening to “the old Israeli standards,” as well as classical music — the incomparable Jascha Heifetz was his first violin idol — and chazzanus. “I was brought up on chazzanus,” he declares. 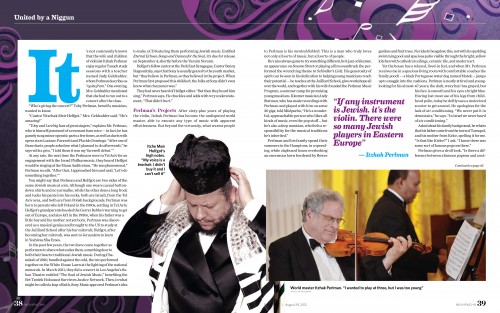 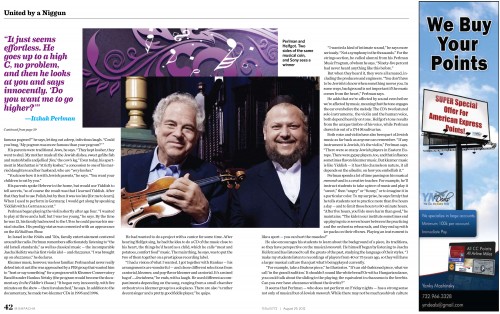