Mishpacha Magazine: MUSIC LESSONS How Baruch Levine captures hearts in class and on the charts

Mishpacha’s mega Yom Tov issue is welcomed into homes and Succos everywhere- a showcase of the magazine’s defining elements- people, places, ideas, graphics and, this year, a special bonus- the Kumzing 2 CD.

A unique and historic visit with the gedolei yisroel of today in their earlier years, behind the scenes with musicians and activists, a stunning visual project involving the top photographers in the frum world, and a special supplement highlighting Then and Now, the way things change, the way they stay the same.

Below is a excerpt from the article on Rabbi Baruch Levine.

It was on a wet porch somewhere on one of those windy streets of Geula. Rain had made the Jerusalem stones slippery, and the stairs were narrow, but the sound pulled us up — strains of a
guitar and a loud, full-voiced singing.

On the porch were a few long tables covered with bowls of cholent and plates of kugel, some empty Super Drink containers, and even a few bottles of beer. The boys sitting around one of the tables were in their late teens. Most were sporting long hair, stubble, jeans, and tight T-shirts. All were singing, eyes shut tight, their bravado gone, and their
Yiddishe chein unmistakable.

Near the head of that table sat a Yerushalmi with wise eyes, curly peyos and an immense tallis kattan over his white shirt, leading the singing. This was Rav Gamliel Rabinovitch, one of the tzaddikim of Jerusalem. Near him, playing the guitar, sat a yungerman from my neighborhood, Maalot Dafna. His natural buoyancy was mirrored by the music coming out of the instrument; he and this vessel of polished wood were one.

Years later, when Baruch Levine released his first album, that image of him, Rav Gamliel, and the teens at that Thursday night gathering arose in my mind. In that album, and in each succeeding one, he captured the magic, the charisma, and warmth of the music we heard on that porch.

Give Me Harmony The first glimpse a visitor gets when entering Waterbury, Connecticut, a city located 77 miles northeast of New York City, is one of urban blight: boarded-up buildings and poorly kept homes. But as you near the area where the frum community lives, there is a marked shift. Attractive Victorian homes line the leafy, well-kept streets. The yeshivah is an impressive former shul topped by a distinctive dome.

was the one with the irritatingly cheerful “good mornings” before Shacharis, chirpy and exuberant when others could barely manage a grunt.

Today, he teaches fifth grade and serves as sgan menahel at the community’s elementary school, but he hasn’t lost his youthful exuberance. He’s also become a leading composer and singer, transplanting the Torah and song of Yerushalayim to distant Connecticut.

Baruch always had rhythm, even as a child in Toronto. His nursery school class once had a famous visitor, Rabbi Shlomo Carlebach, and the story goes that the teachers made sure that little Baruch was seated right next to the singer, since he was the only one capable of “giving” harmony. Baruch says he doesn’t remember the seating arrangements, but he does remember how the singer treated the little kids to a “real concert,” singing as if he was facing a crowd of hundreds.

But the real start of his musical journey was at summer camp. As a ten-year-old boy who was new to the camp, he wasn’t an automatic participant in the cheering and fun at Agudah Toronto. “But, someone suggested that I join the choir, and there I found a place to express myself.”

He became that summer’s star, and got his first piece of good advice regarding his talent. “I got a letter from my parents, and they wrote how happy they were to hear that I was singing in public. But they cautioned me, ‘Remember that it’s just a gift from Hashem, nothing more, and it doesn’t change who you are.’ That sure kept me in line.”

As an educator himself, today he is able to reflect on the evolution of a singer, and how to do it right. “My father, Rabbi Michoel Levine, is a master rebbi. I was always being asked to sing at weddings or bar mitzvahs, but my parents didn’t allow me to accept. If it was a family simchah, however, they encouraged me to sing. They showed me the balance, that everything has a time and a place.”

The Marvelous Midos Machine was then being produced in Toronto, and Baruch tried out — and didn’t get in. He grins. “Last year, they produced a fourth volume, after a break of 20 years, and I’m on that one. I got it out of my system. For my children, it’s the high point of my career.” 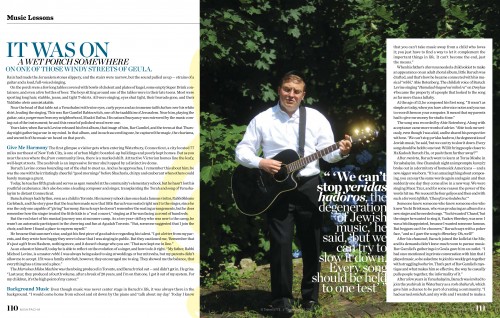 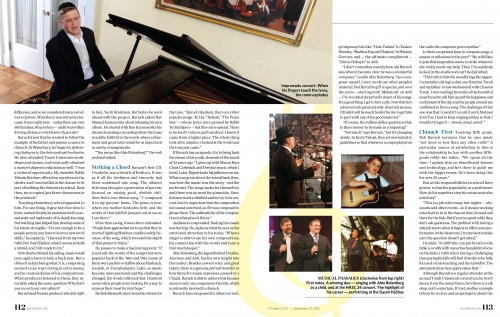