In this weeks Mishpacha Magazine there is an amazing interview about world renown composer/musician Moshe Yess. You can read part of the interview below.

When big, burly Moshe Yess — a $2,500-a-night virtuoso jazz, bluegrass, and classical guitarist — showed up in yeshivah wanting to learn how to daven but not knowing alef-beis, it was
the beginning of something new in Jewish music. Even after three turbulent decades in the industry and years of personal suffering, he left a legendary legacy encapsulated in the lyrical question
that has changed so many lives: “Who will be the Zaidy, if not me?”

I was never particularly blessed where zaidys are concerned; I was too young when both my grandfathers were niftar to remember them well. Nevertheless, even though I’ve heard it ever so many times, I still can’t listen to Moshe Yess’s song “My Zaidy” without reaching for the tissues. It’s an unassuming, nostalgic song about a boy’s love for his zaidy, whose death leads to the collapse of the family’s last ties to Yiddishkeit. But Yess somehow manages to condense the entire tragedy of American assimilation into the space of a few simple lyrics, and then shoot it with an archer’s precision straight into the heart.

My Zaidy was also the title of the first album produced by Megama, the duo of Yess and his partner Shalom Levine. This January marked two years since Yess’s passing at the too-young age of 65, and Levine passed away but a few weeks ago — shortly after making his contribution to a new double CD featuring 30 of Moshe Yess’s most beloved songs. Entitled The Yess Legacy and produced by Gershon Veroba and Yerachmiel Ziegler, it offers fresh yet faithful takes on many Yess standards, performed by an all-star lineup who largely performed for free in honor of Yess.

But who exactly was the real Moshe Yess? Who was this guitar virtuoso who composed and sang so many Jewish classics, and influenced an entire generation of singers and songwriters? 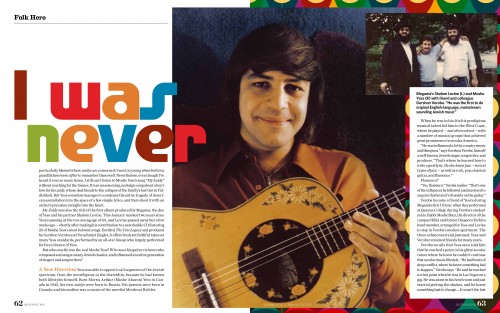 A New Direction Yess was able to appeal to all segments of the Jewish spectrum, from the nonreligious to the chareidim, because he had known both lifestyles himself. Born Morris Arthur (Moshe Aharon) Yess in Canada in 1945, his own zaidys were born in Russia. His parents were born in Canada, and his mother was a cousin of the novelist Mordecai Richler.

When he was in his 20s his prodigious musical talent led him to the West Coast, where he played — and often soloed — with a number of musical groups that achieved great prominence in secular America.
“He was influenced a lot by country music and bluegrass,” says Gershon Veroba, himself a well-known Jewish singer, songwriter, and producer. “That’s where he learned how to write a good lyric. He also knew jazz — several types of jazz — as well as rock, pop, classical guitar, and flamenco.”

“Yes, flamenco,” Veroba replies. “That’s one of the influences he followed and mastered to acquire that level of virtuosity on the guitar.” Veroba became a friend of Yess’s during Megama’s first US tour, when they performed at Queens College during Veroba’s student years. Rabbi Moshe Shur, the director of the campus Hillel and former Diaspora Yeshiva band member, arranged for Yess and Levine to stay in Veroba’s modest apartment. The three schmoozed and jammed. Yess and Veroba remained friends for many years.