It was an Israeli rabbi, Rav Avraham Moyal of Yeshiva Aish Hachaim, who first introduced producer Avi Newmark to newcomer Gabriel Tumbak. Born and bred in France, the 24 year old Tumbak has been singing since age 11 and has been studying with French Chasidic singer Michael Saura, who he credits with giving him that extra nudge to make his mark in the Jewish music world.

Tumbak had the opportunity to sing with Ohad at his own wedding in 2009 and then again, one year later, at a Pesach concert at Yam Hamelach.

“I definitely wanted to become a singer since I met Ohad,” says Tumbak.

“When I first heard the demo that Gabriel had made, I thought I was listening to an original piece,” said Newmark. “He made the song his own and for just a few seconds I thought he had actually composed the song. Although he is new to the scene, he works like a pro and has a passion for music that I don’t even see in some people who have been doing this for years.”

Newmark, who has a history of turning unknowns into stars, thinks Tumbak has what it takes to go far in the Jewish music business and the two are already hard at work on a debut album.

“Gabriel’s passion made Kol Haneshama the perfect song to introduce him to the public, bringing a little bit of his neshama to the music fans out there,” said Newmark. “We figured it was a good opportunity to offer a sneak peak of what we are working on.”

For Tumbak, the opportunity to break into the mainstream Jewish music business with a veteran producer is the chance of a lifetime.

“Working with Avi was my dream and thanks to Rabbi Moyal my dream came true,” said Tumbak. “I was so impressed to see how dedicated Avi was to this project. He paid attention to each detail like it was his very first album and Avi’s knowledge of music is amazing. He is not just a producer, he is addicted to music. I just had to follow Avi’s advice and everything became easy.” 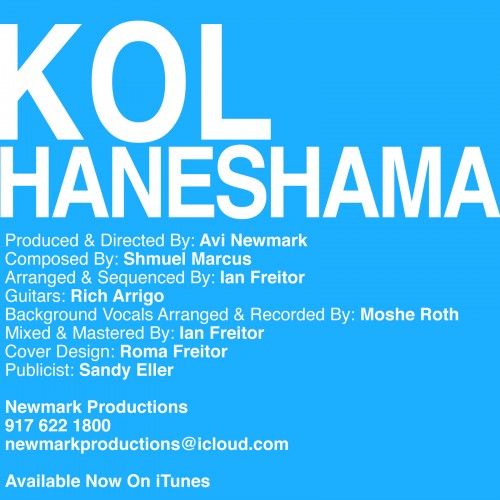