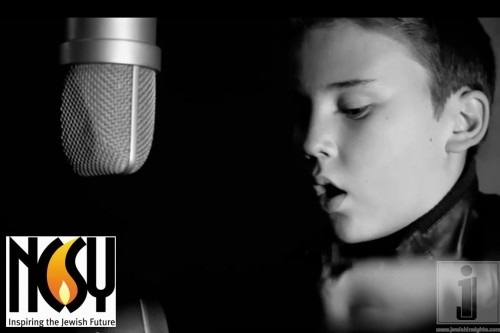 Edan Pinchot is 12 years old and famous. Dubbed the “Jewish Justin Bieber”, his singing, piano-playing videos on YouTube have already been viewed over 100,000 times by fans across the world.  Today, NCSY announced that Edan and NCSY have collaborated to release a new music video, intended to boost awareness and increase participation in NCSY’s groundbreaking national Chinese Auction.  The music video is based on the Auction’s  theme:  “Imagine”, and was inspired by John Lennon’s song of the same title. The Auction will raise funds to send Jewish public school teens to Israel.

Like NCSY, Edan has used his imagination to improve the world around him.  Edan does this through music and his stirring voice.   Although he always loved singing, his “stardom” began this past summer when his sister posted videos of him on YouTube for her friends.  The videos quickly went viral as thousands of people discovered his talent, including the likes of Howard Stern, who mentioned him on his radio show, and pop singer Sara Bareilles, who tweeted about one of his videos.  His voice can be heard on laptops and iPods from California to Jerusalem, with fan clubs in Long Island and Spain.  Based on his YouTube performances, Edan was recruited to participate in the upcoming Shalsheles Junior album.  Edan admits he couldn’t have dreamed that he would end up where he is now. There is a parallel “never-could-have-dreamt-of” goal for these NCSY public school teens, who will see the Land of Israel for the first time.

The partnership with NCSY was born when Duvi Stahler, marketing director for NCSY, approached Edan about collaborating to promote the cause.  Edan jumped at the chance, explaining that “singing has become so inspirational for me; I realized that NCSY and this event are trying to do the same for kids by bringing them to Israel.  The truth is I don’t know where my singing will lead, but I do know that this Auction is a great place for it to start.”

The theme “Imagine”reflects the increased aspirations of this year’s Auction, as it will be the first time NCSY’s Chinese Auction is moving beyond its New York limits, and its remarkable range of prizes reflect its national expansion. The Grand Prize is the choice of a sefer Torah or $18,000, and other prizes include package trips to various tropical and international locales, as well as room makeovers and valuable product offers.

The song premiered on the Nachum Segal Show on Monday morning, February 21.