Haazinu: An Evening of Harmony XI: Review and photos 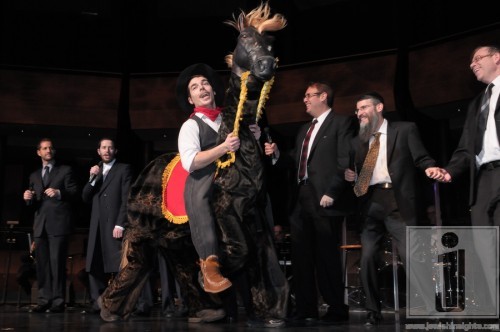 This past Sunday evening was a truly special and elegant evening. Besides it being my first time at the Rose Theatre at the Jazz at Lincoln Center, the reason I was there, the annual Haazinu Concert “An Evening of Harmony XI, was set to be an extraordinary event. With so many amazing organizations putting on yearly concerts throughout the calendar year, it is amazing how many different people they help. Take Haazinu for example. Haazinu provides every possible means of assistance to hearing-impaired youngsters. From a fledgling organization catering to a handful of children fourteen years ago, Haazinu now caters to the needs of well over 300 hearing-impaired children throughout the world. From the moment of diagnosis and on through high school and college years, Haazinu is there with a variety of services to help youngsters and their parents navigate the way to success. Now let me tell you about the show. Firstly, it was very intimate and classy show, which I guess is why Suki & Ding productions chose the Rose Theatre at the Jazz. The lights dimmed and the announcer’s voice welcomed everyone and introduced the evening orchestra, which included Rabbi Suki Berry, Jim Hynes and was conducted by the multi talented Rick Cutler. They opened with a medley of Fried, Gertner and more. It was truly a pleasant way to start the evening. 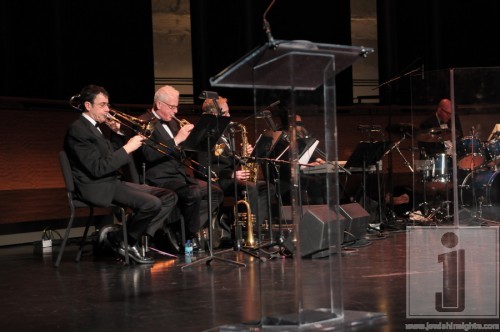 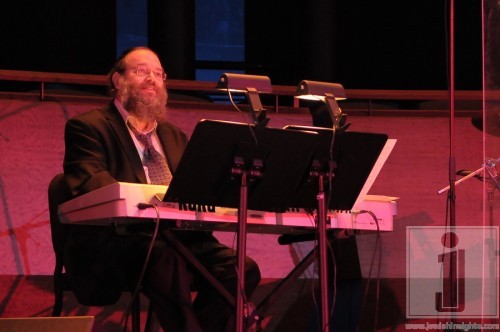 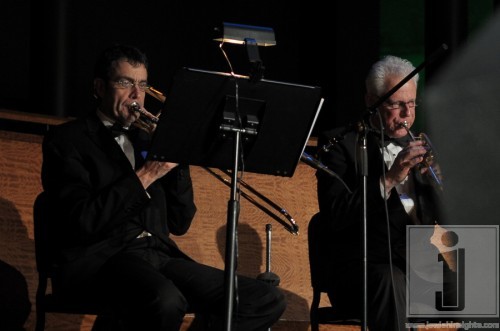 Next introduced was the special musical celebration “Generations Unite” and first up was the father/son team of Shloime and Dovid Dachs. As the opening notes of Yossi Green’s world famous “Anovim” resonated throughout the theatre, so did the voice of father and son. But where were they? Shloime and Dovid Dachs entered from the rear of the concert hall making their way down the aisles while singing the opening lines to Anovim. It’s remarkable how much in sync this father and son team are. There was enough give and take to let each one shine in their own right, yet when the time came for harmonies, they blended seamlessly. The Dachs duo finished their set with Shloime Dachs’s Hamalach and the Rose theatre erupted into applause. 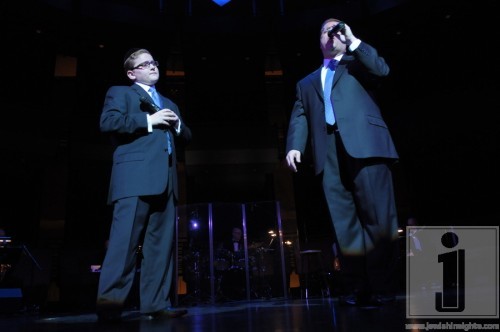 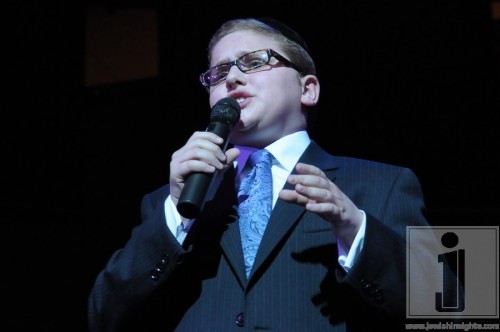 Who would follow the Dachs father/son act? When the light came on Binyomin Williger was on stage and the band started to play MBD’s, Omar Rabbi Akiva the audience already started clapping. Now not only is Binyomin an accomplished singer as we all learned that night, but he is also a VERY accomplished dancer. Binyomin was making cartwheels and head stands when his father Yisroel joined him on stage. The two then completed the song and were awarded with cheers from the audience. 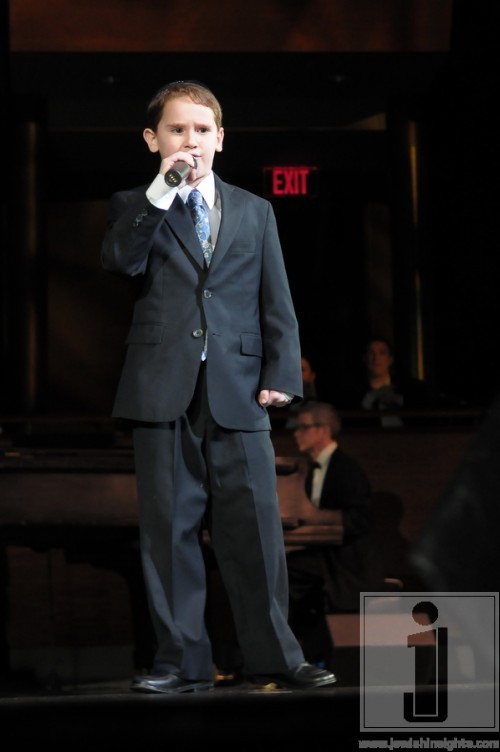 Well at this point we all knew who was next. Eli and Avromie Schwebel. Eli sat down at the piano and started to tell us how fortunate the Schwebel children were growing up in a house full of music. The song they were going to perform was Abie Rotenberg’s “Memories”, a favorite of the Schwebel household. With Eli at the piano the band joined. Now this song is a favorite by many and it truly haunting. Eli’s voice which is a powerhouse with its very unique flavor started the story about a tired and worn out man. By the time Eli reached the chorus, Avromie had joined in and the harmony was flawless. Avromi has been part of Shalsheles Jr. for almost a year now and it shows. The control and notes he was hitting while keeping in sync with his brother Eli were truly amazing. This song was for sure one of the many highlights of the evening for me. When the final lyrics, “won’t forget”, faded out the audience found themselves on their feet giving them a standing ovation. 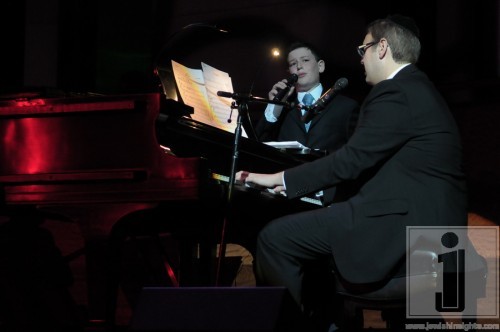 Now it was time for us to gain a little insight into what Haazinu does. We were treated to a speech by one of Haazinu’s own. Zalmy Sandler a 14 year old yeshiva boy who spoke was truly inspiring. He was articulate and funny, taking about growing with machines to hear till he was able to have surgery. He ended by thanking everyone for supporting this wondrous cause. 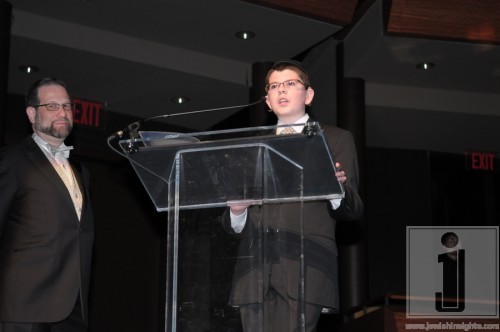 It was time to lighten up the mood and who better then comedian extraordinaire, MODI, to do that. Now I have seen Modi perform before but he still amazes me how he can be extremely funny even to the children there, and keep it clean. He interacted with the crowd and was amazed at the different types of Jews that came out to support Haazinu. 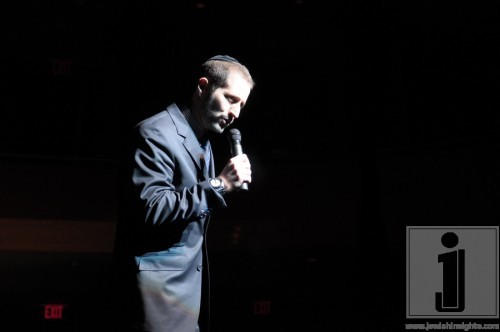 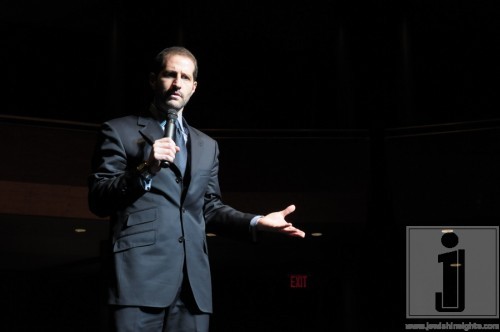 Now we were getting to the “meat” of the evening, Shloime Gertner and Avraham Fried. First up was Gertner. Shloime came out with the title track of his latest blockbuster album “Say Asay”. Gertner has great charisma and his performance is magical. When the applause died down Shloime thanked everyone for coming and told the story of meeting Yossi Green a few years ago. Shloime told Yossi about his daughter Malka who had a disability and how he used to sing to her, “Malka, Malka”. After another hour of trying to compose a new song, Yossi says he’s got it and plays Shloime the song “Kodesh”. Shloime sang this particular song with such emotion and that there wasn’t a dry eye in the building. How was Gertner going to end this amazing set? With an energized song from his first album that has a positive message “Im Ain Ani Li”. With that, Shloime left the stage amidst the cheering and clapping. Leon Goldenberg who was mc’ing the evening and happens to be the Haazinu concert chairman introduced the next speaker Rabbi Moshe Yaroslowitz executive director. Rabbi Yaroslowitz gave us a better idea of how many different ways Haazinu can help children and their families. 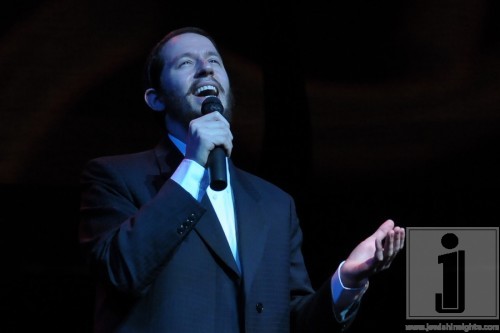 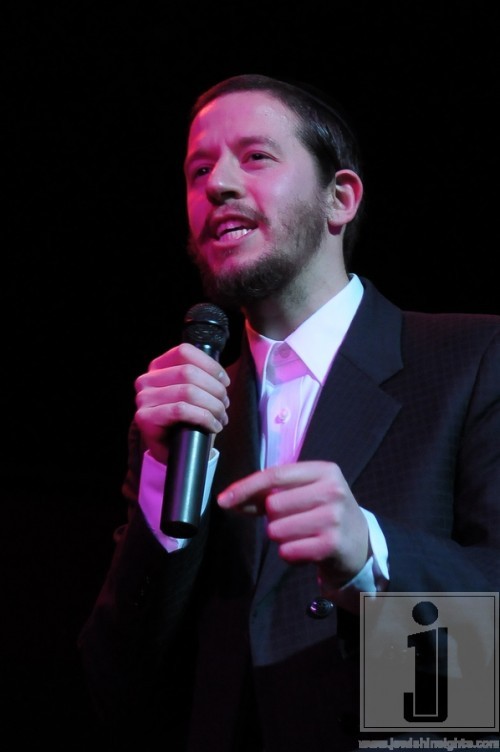 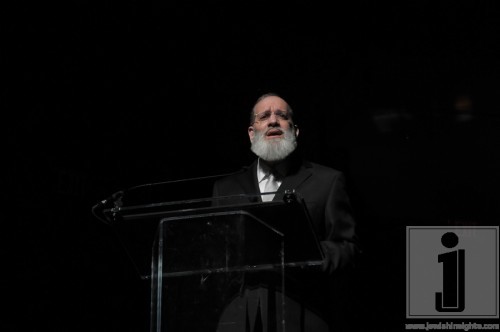 It was time for the “golden voice” in Jewish music, the one and only Avraham Fried. I will say this about Fried, besides his voice getting better with years, his uncanny way of picking the right songs to perform truly make him remarkable. Avremel’s opening song is one of my all-time favorite, and it’s not even on a Fried album. I am talking about “You’re Never Alone” which was featured on the album Holyland’s Greatest Hits. With some updated arrangements Avremel together with the Orchestra really took it home. Here was Avremel in his element and the crowd was eating it up. What better message can one give then don’t give up in today’s day and age. When the applause died down Avremel told us about how the world is changing in a matter of days, governments being toppled, and people “taking to the streets”. He said the next song is a really old song that he has never recorded to date. Fried was dedicating the song to the memory of Moshe Yess. The song was “My Zaide”. Seeing and hearing my favorite singer of all time performing this loved classic with his own “spin” on it was mesmerizing. It was so raw and emotional that you could feel a sigh pass through Rose Theatre that night. As the song died down, I was sure all of Manhattan could hear the applause from the Jazz right then. Avremel asked if there were some Israeli speaking people there and the audience responded in the positive. He said that the next song is a Israeli song and when he sings the first bars the crowd usually erupts into cheering. When the first lyrics “Rak Tefilla” resonated in the theatre, the crowd did just that. Now this song is NOT new, but there is just something about it that makes you want to join in and sing on the top of your lungs. With that last song Avremel’s set was over. 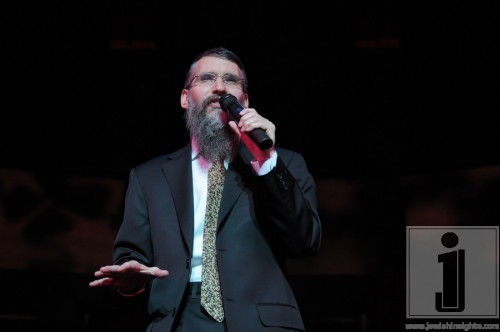 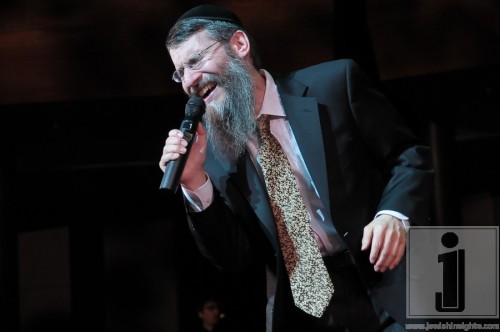 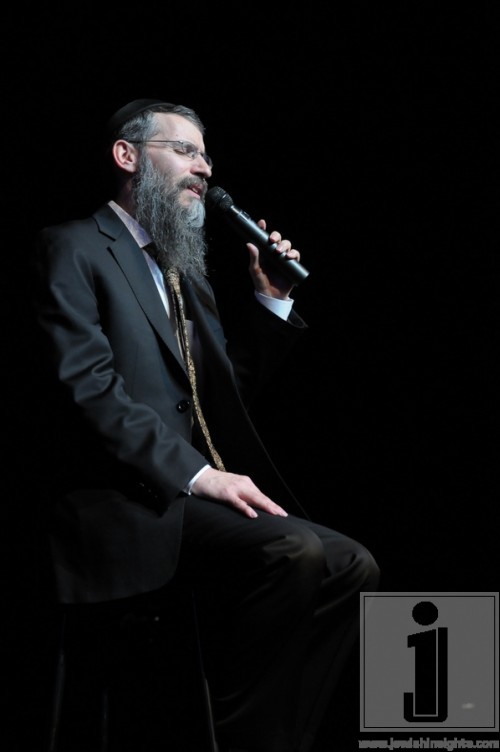 The lights dimmed. Who would be next? The were two shadows standing on stage. Would it be yet another father/son set? When the lights came on both Avraham Fried and Shloime Gertner were there and they performed both “Nissim” and the world famous “Ki Hirbeisa”. It is truly awesome to see a seasoned singer like Avremel and a “newer” one like Gertner respect each other yet add melody to each other’s vocals. It was a great way to end the evening, but wait, they weren’t done yet. The entire cast appears on stage to join Fried and Gertner for a song that in the last year or two has re emerged back into the wedding scene, “Mareh Cohen”. If that wasn’t enough the band started playing the song “vayehi bimei achashveirosh” and the world renown Twins from France were in a horse costume and galloping across the stage. It was such a joyous/funny moment that you couldn’t help but smile and feel happy. At one point the twins urged Avremel to get up and “ride” around on the horses back, and he did. The show ended and it wasn’t even ten pm. A smashing show by Suki and Ding productions, intimate yet not too long. Just the right amount of time to get home at a reasonable hour and play back in your head the events you witnessed earlier that night. If you would like to donate to Haazinu or find out more about their services please visit Haazinu.org. 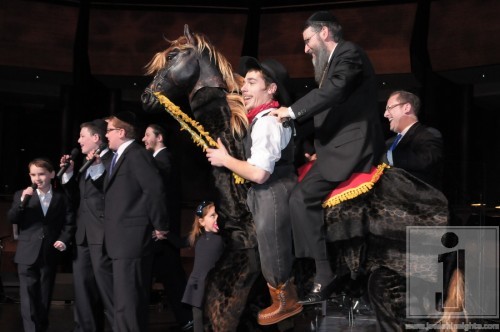 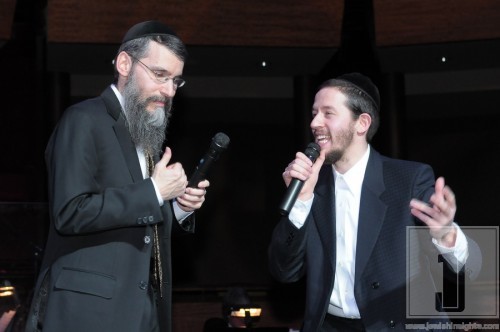 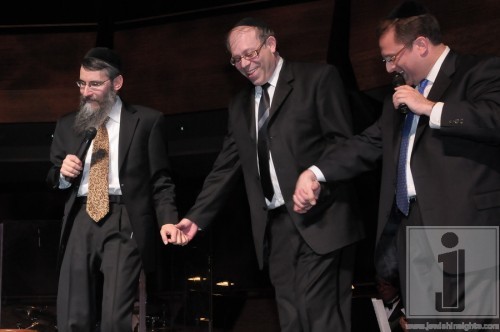 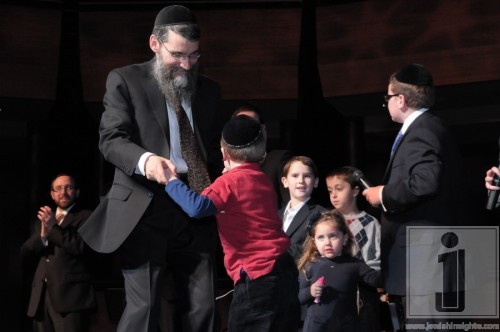 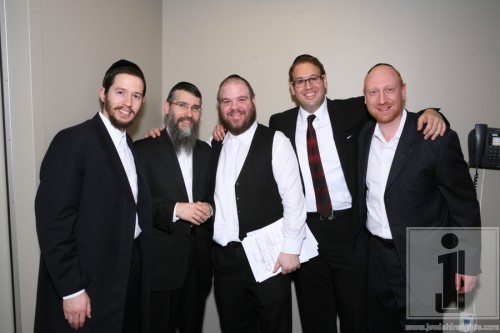 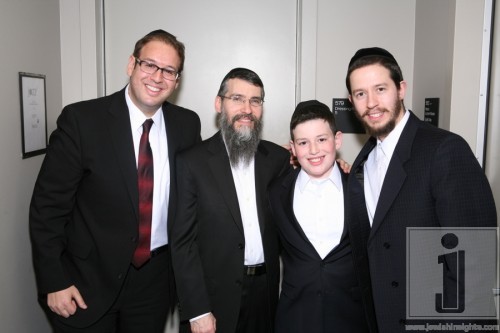 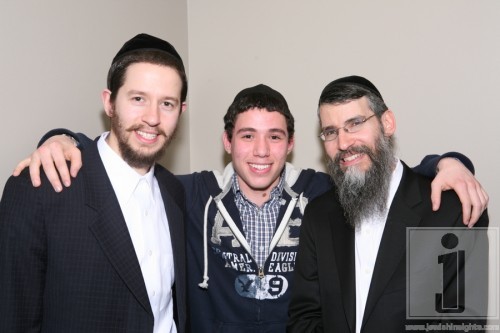